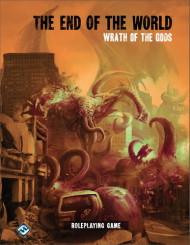 In the first episode of our second RPG series, Marty from Rolling Dice and Taking Names, Sean from the Dukes of Dice, and game designer Jon Gilmour join us as we experience the end of the world in The Wrath of the Gods, the 2nd RPG book in the End of the World series from Fantasy Flight Games. We build our characters, who happen to be ourselves, explain the system, and then dive into the Apocalypse.

This episode is sponsored by BattleBards & Cawood Publishing